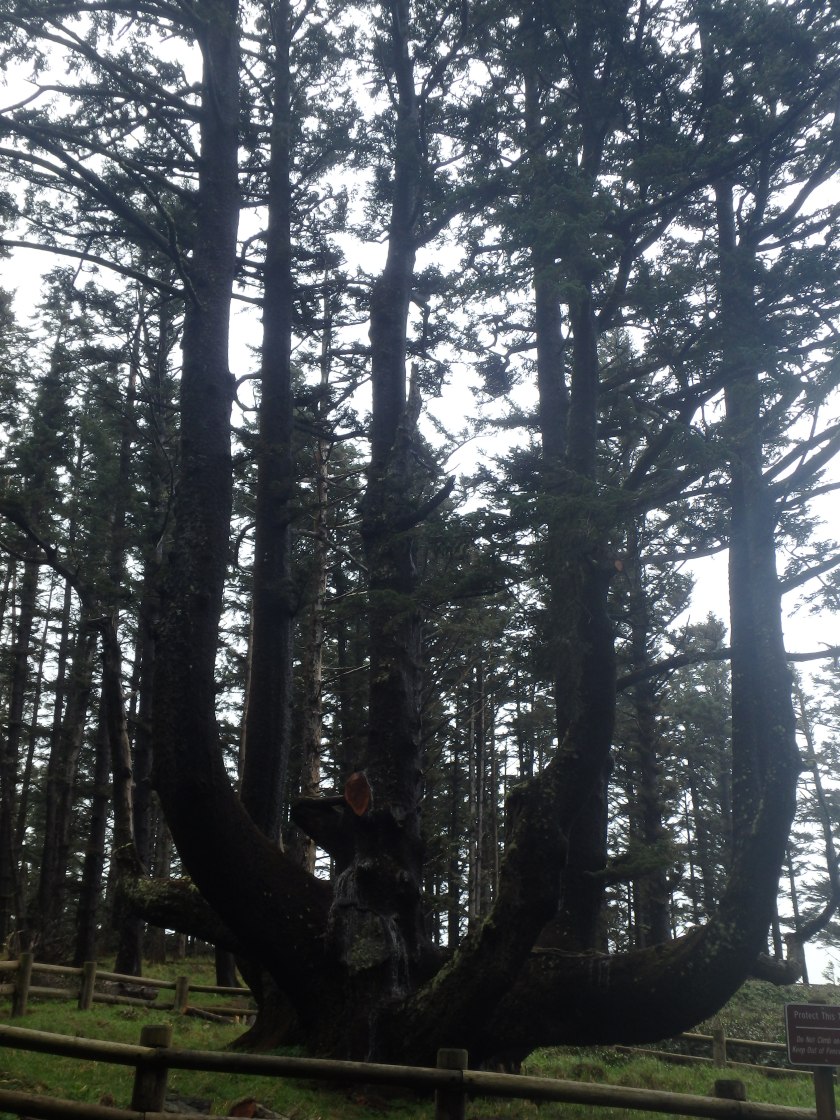 Rain coming, a good day to explore, shop and be a tourist. Into Tillamook, where I visited two of the cheese companies: the Blue Heron focusing on French Cheeses, the French roosters were a clue, and the Tillamook Coop. Purchased a variety of cheeses: blue, bread cheese – something new to me, and a block of white cheddar, yummm, also a bottle of an excellent blue cheese salad dressing and a beer hot mustard. I’ll have to pick up another bottle or two of both the salad dressing and mustard before leaving the area.

Next, I drove out to the Meares Lighthouse at one end of the Three Capes Scenic Highway, technically beyond the end of 131, up the mountain. The lighthouse is the shortest lighthouse on the coast, because it sits atop a mountain. From the top the nesting places of some 250,000 birds on the cliffs can be seen. They were not in residence in force, but some remained in the area. Nearby is the Octopus Tree. Down below the Lighthouse is the town of Oceanside, Oregon. I went out on the beach at low tide and through a tunnel roughly cut into the mountain allowing access to the next beach over. Cool.

The drive down the Three Capes Scenic Highway was a pleasant drive. I could see people fishing, oyster or clam, and crabbing in the light rain. Back before the rain came in. Rained again all night long. Oregon is wet!

Come Hike with Me

Rise up! Come hike with me.
Some bright, early morning,
we’ll go places you want to be,
do things you want to do,
and see sights you long to see.
Come breathe clean mountain air,
and enjoy nature’s fine beauty.
Pick a day, any day. I’ll be there for you.
>>>>
"Come Hike with Me," Moments Along a Trail, by Thomas Buzas, Trekkers Stories LLC, 2015, p9.