Went to Butte with Bamboo to have breakfast, to see the Mining Museum, the Headframe distillery and lunch. Bamboo’s friend invited us to his house for delicious sausage and biscuits, fresh squeezed orange juice. Thanks Matt, Lucy and Molly.

Afterwards, we toured the Covellite Theater, which Matt is restoring and renovating. It is a historical building, formerly a church. There is a small theater/ refreshment area below the larger main theater, Up top, there is a good view of the city.

From there we went to the Mining Museum which had a nice collection of minerals, gems, and other rocks along with mining equipment and houses filled with items of historical accuracy. There is an underground tour of a mine, but I passed on that. There was a picture of the area taken from an airplane, I imagine. We counted 23 mines in operation at one point. One remains. That is a headframe below, different elevators carried miners and ore.

We drove up a hill on the outskirts of the city for a better view of the city. That is the city, hard to see but the operating mine is in the distance. If you zoom in, you might see a terrace which marks the backside of the pit.

The Headframe Spirits Distillery had 7 items available: each named after a mine Anselmo Gin, High Ore Vodka, Orphan Girl Bourbon Cream which is very popular in the area, and 3 whiskeys: a light whiskey, approaching moonshine in its clean taste Destroying Angel, a short run Rye, and Neversweat Bourbon, a sipping whiskey. I liked the rye and Neversweat the best. It was a nice break from breweries. Thanks Kyle for chatting with us. That is a picture of the bar.

For lunch, I wanted to go to the oldest Chinese restaurant – opium den – whore house, but they had to close on Sundays. Nah, that’s formerly opium den and whore house, but they were closed anyways. Instead, we went to the main John’s Pork Chop. Bamboo had never been to John’s. The wings were very good too. I purchased 8 frozen to put in my freezer for later.

After that it was back to Anaconda, to get ready to pull out tomorrow for Glacier National Park.

I had a very good time in Anaconda. The people were very friendly and helpful. I got in some good hiking, saw some wildlife, and spent time with old friends. 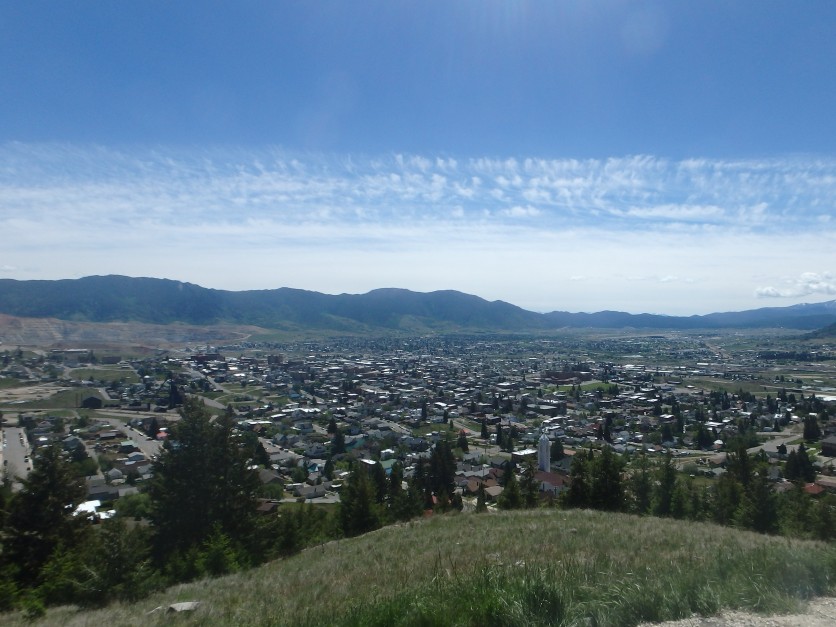 Come Hike with Me

Rise up! Come hike with me.
Some bright, early morning,
we’ll go places you want to be,
do things you want to do,
and see sights you long to see.
Come breathe clean mountain air,
and enjoy nature’s fine beauty.
Pick a day, any day. I’ll be there for you.
>>>>
"Come Hike with Me," Moments Along a Trail, by Thomas Buzas, Trekkers Stories LLC, 2015, p9.